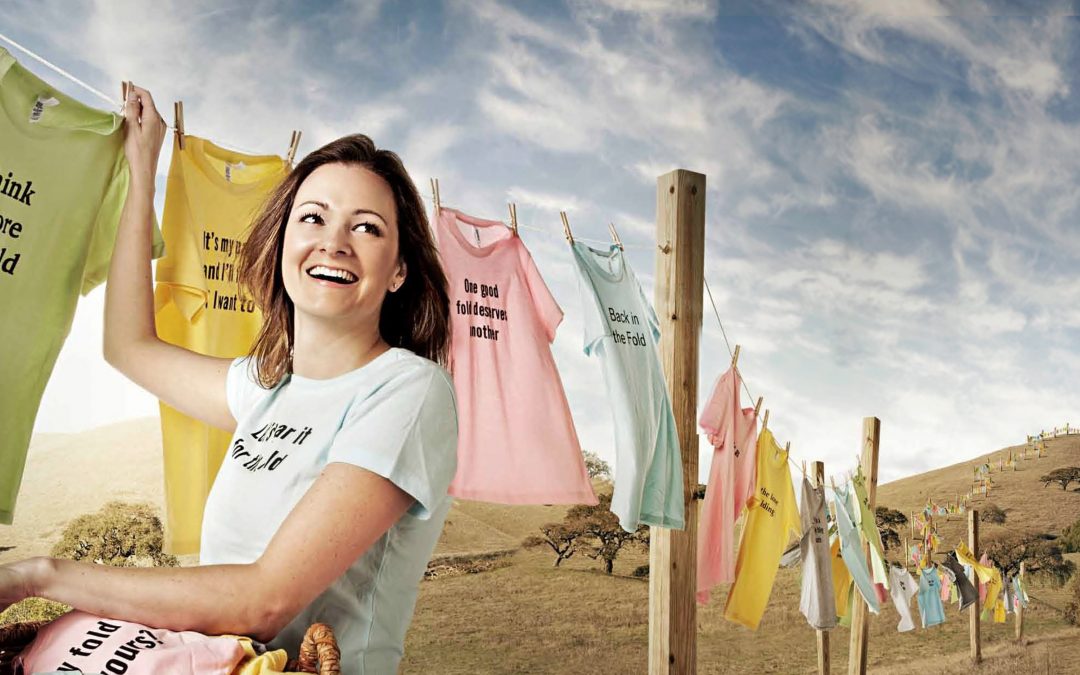 Above: “The coolest and most elaborate photo ever taken of me.” Photo credit: Eva Kolenko for USPS Deliver Magazine

When I started shooting Fold of the Week almost 12 years ago, I’m not sure that I actually thought through the possibility that the show could end up with a cult-like following and 500+ episodes. After all, with my “fun folding-themed shirt for every show” model, 500+ episodes means 500+ unique shirt slogans. Good ones. I think we can all agree that the show would really lose something if my shirt slogans lost their wit and humor.

I enjoy thinking up the slogans, and hearing from viewers who send ideas. In fact, some of my favorite shirt slogans have been viewer-submitted. I choose each week’s slogan deliberately, and some I hold for the perfect opportunity, holiday, or occasion.

I’ll also share (possibly over-share?) that it’s super weird to watch yourself change over the years, with good hair days and bad hair days, gaining and losing a few pounds, summer tan to winter pale, switching studios and plants and wall colors. I have a video of myself documenting every week of the past 12 years of my life. Think about that. A lot can happen in 12 years for sure.

Digital technology has changed dramatically, too. I started with a little consumer-quality digital video camera in a spare bedroom, and over time graduated to the hi-tech professional audio/video/lighting setup that I have in my video studio today.

When I think of the show, it’s hard for me to grasp just how many videos I’ve made, but I get a real sense of it when I scroll my Fold of the Week shirt database. I get a lot of questions about whether I repeat shirt slogans, or what all my shirts have said, so I decided to pour them all into a list for you. There’s an accidental repeat or two, which infuriates me (I won’t tell you where they are—you’ll have to find them yourself) but almost every single shirt is unique, and will continue to be for as long as the show goes on. “Repeat slogans are for quitters!” Is everyone with me??

For those who want to “wear their fold on their sleeve,” I have a Foldfactory store at Zazzle where you can buy shirts and mugs with my folding slogans on them! You can choose from what’s there, or type in your favorite slogan and choose your shirt or mug color.

So, here you go. Fold your socks off. And I welcome your shirt slogan ideas for upcoming episodes. Send me a note if you have one. I think I’m going to need all the help I can get!

Fold of the Week” Shirt Slogan List By Episode

Trish Witkowski is a designer, a content creator, and a keynote speaker. She knows more about brochure folding than anyone else in the world.
Read more →

Join Fold Club–it’s Free
Join more than 16,000 subscribers who enjoy unlimited access to our award-winning Template Builder, free downloadable templates and resources, bonus insights from Trish, and the “Fold of the Week.”
Join and Get Started